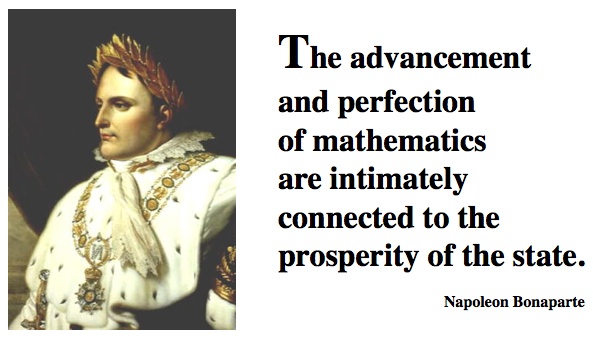 Though it's not clear historically whether Napoleon (1769-1821) actually discovered and proved the theorem named after him, he was a keen geometer nonetheless. Apparently he was once engaged in mathematical discussion with the great mathematicians Lagrange and Laplace until the latter told him, severely: "The last thing we want from you, general, is a lesson in geometry." Laplace later became his chief military engineer. - Coxeter & Greitzer (1967, p. 63), Geometry Revisited.

Challenge:
1) Try and explain why (prove that) your observations are true.
2) But if you get stuck, have a look at my book, Rethinking Proof with Sketchpad, which contains a guided discovery and proof of the result (as well as in the Teacher Notes, proofs of the generalizations below). Or alternatively, consult my book available in printed form or PDF download at Some Adventures in Euclidean Geometry.
3) Various proofs are available online as a Google search would reveal. This site, for example, provides an elementary proof, as well as more proofs of related results, and also more historical background. Another reliable source for proofs and historical background to use is, of course, the online encyclopedia Wikipedia's entry on Napoleon's theorem.

Then explore the generalizations and variations below, and also try to explain (prove) why they are true.

Some Converses of Napoleon's Theorem