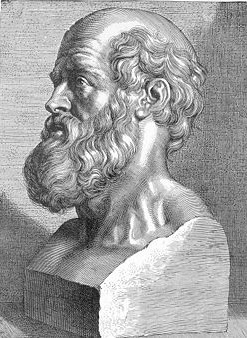 A halfcircle on AB is constructed to pass through C, as well as halfcircles on BC and AC as shown. The white 'crescent moons' on BC and AC are called LUNES.
1) Drag A, B or C.
2) What do you notice about the sum of the areas of the lunes? Make a conjecture.

(Note: The Greek mathematician, Hippocrates of Chios, is not to be confused with the different Greek physician of the Hippocratic oath in medicine.)

Challenge: Can you explain why (prove) your conjecture above is true?

Further Extension & Variation:
1) Hippocrates' Theorem generalizes to a 'right quadrilateral', namely, a quadrilateral with a pair of opposite right angles as shown in the first figure below. Here the sum of the lunes on the sides is equal to the area of the right quadrilateral1.
2) The second figure shows a variation of the theorem and in this case, the lilac (purplish-grey) region minus the red region is equal to the area of triangle ABC. Can you explain why (prove) this is true? 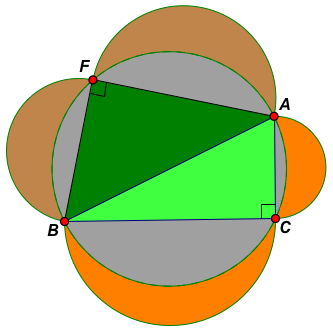 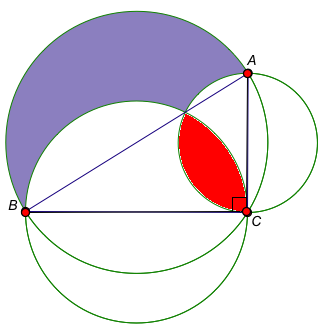 Notes:
1) The term 'right quadrilateral' was also used in my 1994/2009 book Some Adventures in Euclidean Geometry, pp. 73-74 for a quadrilateral with a pair of opposite right angles.
2) Hippocrates' Theorem or variations of it appears on and off in Mathematics Competitions around the world. For example, see Q10 of the 2009 Senior 2nd Round of the South African Mathematics Olympiad. The theorem also appeared in the Daily Problem, AMESA Congress, June 2009 and was used by Phadiela Cooper from COSAT to investigate the collaborative problem solving of children in small groups - the topic of her plenary at the AMESA Congress, University of the Western Cape, 24-28 June 2013.

This page uses JavaSketchpad, a World-Wide-Web component of The Geometer's Sketchpad. Copyright © 1990-2011 by KCP Technologies, Inc. Licensed only for non-commercial use.