NOTE: Please WAIT while the applet below loads.

A generalization of Neuberg's Theorem and the Simson line

A generalization of Neuberg's Theorem (1892)
From point P construct lines to the sides (or their extensions) of ΔABC so that they form equal angles with the sides (e.g. ∠PA1B = ∠PB1C = ∠PC1A). Repeat the same process from P to the Miquel ΔA1B1C1, and again to Miquel ΔA2B2C2. Then ΔA3B3C3 is similar to ΔABC.

Notes
1) Read some historical background on Joseph Neuberg (1840-1926).
2) I have called such equi-inclined lines, the Miquel lines, and the respective distances measured from the point P to the sides, the Miquel distances.
Reference: De Villiers, M. (2002). From nested Miquel triangles to Miquel distances. Math Gazette, 86(507), pp. 390-395.

A generalization of Neuberg's Theorem

Challenge
1) Drag any of A, B, C, P, C1, A2, or B3 to dynamically explore the result.
2) Can you explain (prove) your observations?
3) Can you generalize further to quadrilaterals? Explore!

Explore the further or related generalizations below and also try to explain why (prove) they are true.

A generalization of Neuberg's Theorem to polygons

A generalization of the Simson-Wallace line (1799)
From point P on the circumcircle of ΔABC construct lines to the sides (or their extensions) of ΔABC so that they respectively form three equal angles with the sides. Then these three "feet" lie on a straight line, the 'Miquel line'.

Important: To view & manipulate the dynamic version of the Simson-Wallace generalization, navigate to it using the appropriate button in the dynamic sketch right at the TOP; the picture below is static. 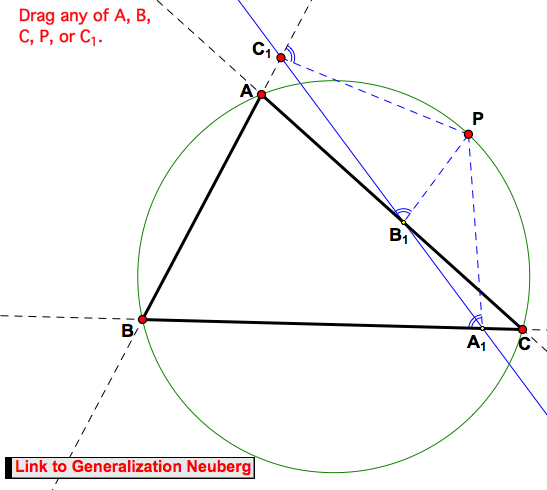 A generalization of the Simson-Wallace line

Explore the further or related generalizations below and also try to explain why (prove) why they are true.

Download an article of mine from the Mathematical Gazette (2002) giving proofs of the results above from From nested Miquel triangles to Miquel distances.