NOTE: Please WAIT while the applet below loads.

Theorem: If triangles DBA, ECB and FAC are constructed outwardly (or inwardly) on the sides of any ∆ABC so that ∠DAB = ∠FAC, ∠DBA = ∠EBC and ∠ECF = ∠FCA, then DC, EA and FB are concurrent. 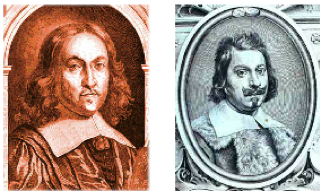 In the special case (originally posed by Fermat in the 1600's and solved a little later by Torricelli) of the above result, when equilateral triangles are constructed on the sides of a triangle ABC (with none of its angles greater than 120 degrees), then the Fermat-Torricelli point minimizes the sum of the distances from it to each of the vertices1. It is therefore a useful theorem for determining the optimal position for building an airport for 3 cities of more or less equal size. This is available as a learning activity, with a guided proof that students find interesting, from my Rethinking Proof with Sketchpad book, which is also available at Amazon, and various other book-sellers.

The Fermat-Torricelli Generalization above is also of practical significance as it can be used to solve a 'weighted' airport problem, e.g. when the cities have populations of different size. For example, go to Weighted Airport Problem.

Download an article of mine from the Mathematical Gazette (1995) for a proof of the result above from A generalization of the Fermat-Torricelli point. An earlier, different proof by Pargeter was also published in 1938 in the MathematicalGazette.

This theorem easily provides a proof for the result of the so-called De Villiers Points of a Triangle as illustrated in die diagram below. (Click on the preceding Link to view a dynamic sketch). 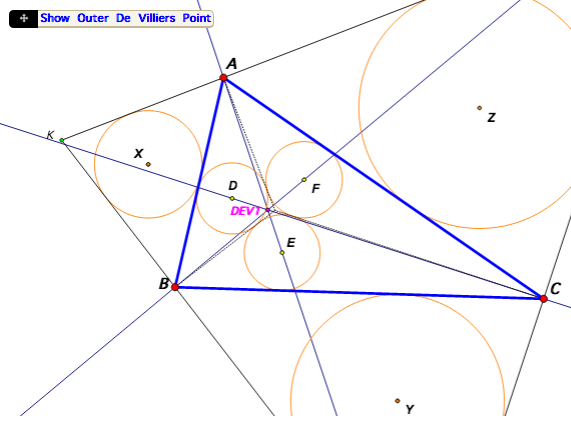 Further Fermat-Torricelli Generalization: If points K, L, M, N, O and P are constructed on the sides of triangle ABC so that BK/KC = CL/LB = CM/MA = AN/NC = AO/OB = BP/PA, triangles OPD, KLE and MNF are constructed so that ∠DOP = ∠FNM, ∠DPO = ∠EKL, ∠ELK = ∠FMN and triangles LMY, NOZ and PKX are respectively similar to triangles OPD, KLE and MNF, then DY, EZ and FX are concurrent.
View: Click on the link 'Further Fermat-Torricelli Generalization' on the bottom right of the above sketch to navigate to a dynamic, interactive sketch illustrating this interesting, further generalization. 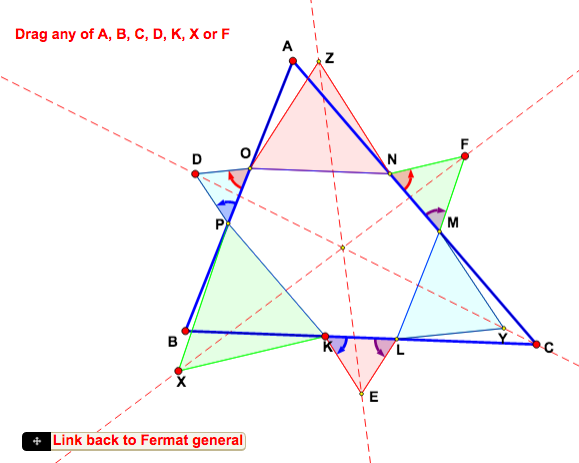 Download an article of mine from the Mathematical Gazette (1999) for a proof of the result above from A further generalization of the Fermat-Torricelli point.

Note1An interesting property of the Fermat-Torricelli point that minimizes the sum of the distances to the 3 vertices of a triangle (with none of its angles > 120o) is that the three angles surrounding the optimal point are each equal to 120o. A physical model with 3 equal weights hung over pulleys, connected by thin rope, simulates the minimization of the distances, and moves to the optimal position when the system stabilizes. Pictures of such a simulation done with the assistance of Mahomed Bacus on the Edgewood Campus, UKZN are shown below. 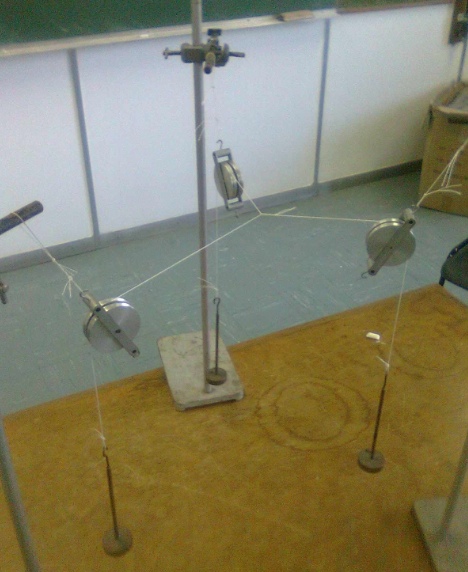 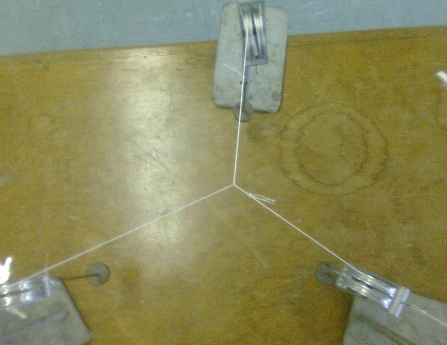 Another beautiful way to illustrate the Fermat-Torricelli point is by using Soap Bubble Geometry. The physical properties of soap film are such that they would always tend to a shape or position of 'minimal energy'. It can therefore also be used to model solutions for the shortest road networks between 3, 4, 5, etc. cities (so-called Steiner networks). Some soap film solutions are illustrated at Minimal Soap Film 'Road' Networks.